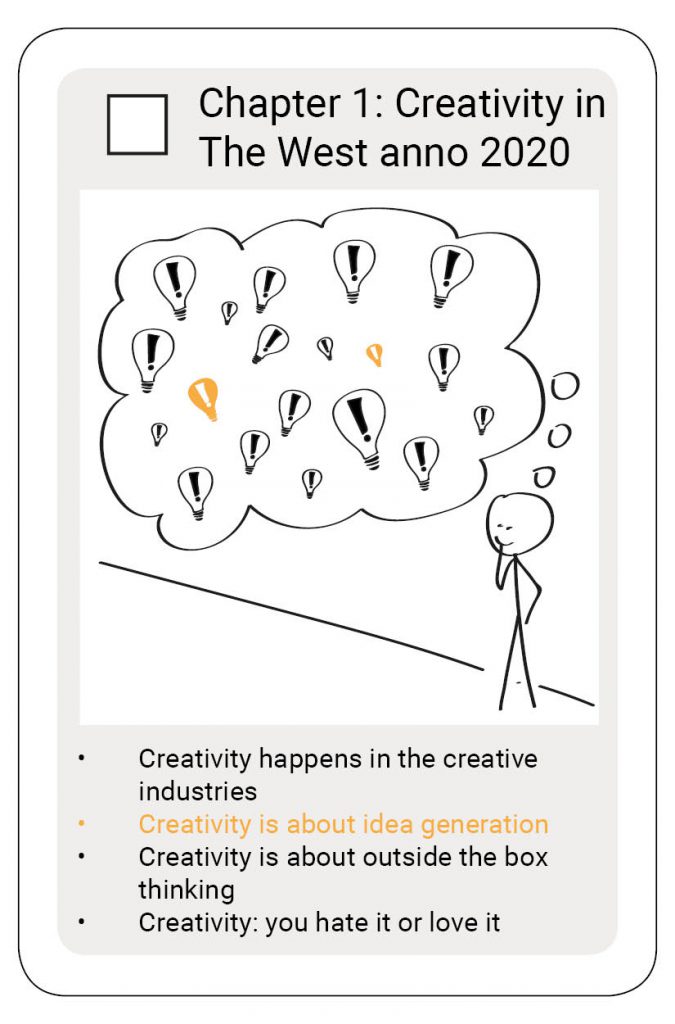 In the previous two articles, I explained the Western social and economic landscape in which creativity had a chance to become a valuable ability. This week and next week, I will virtually walk around in your offices and explain some of the ‘creativity talk’ you hear and maybe speak of yourself.
As I was writing this article I realized this is the article I’ve been breeding on for years. It is a topic I’ve been trying to get my head around it since 2014. I actually wrote the first version of it last year, as an article on LinkedIn. This one is better.
Here is the WRONG assumption:
Creative thinking = divergent thinking (diverging) = idea generation(ideation)
In this article I will explain why these assumptions are false, and why we even have these assumptions. The strong association we have between creativity, diverging and ideation was laid in five years: 1948 to 1953. By two men. One from the Eastside, one from the Westside. One from science, one from commercial business. One of them seriously misunderstood (or even unknown) in practice, the other ignored in science. Let the battle begin. 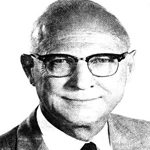 In California, we meet Joy Paul Guilford (1897-1987). Guilford from Nebraska became an elementary school teacher after high school for two years. Then, after one year at the University of Nebraska, he joined the Army. After being discharged he went back to the same university and obtained his Bachelor’s and Master’s degree in psychology. He obtained his PhD at Cornell University in 1927. Later he moved back to the University of Nebraska to become a Professor of Psychology and gained an international reputation. In 1940 he moved to the University of Southern California, where he stayed until retirement (Comrey, 1993).

The ‘start’ of creativity research

In 1949 Joy Paul Guilford became President of the American Psychologist Association (Comrey, 1993). In his inauguration or keynote speech, he urged his colleagues to invest in the research on creativity. His speech was published in 1950 (Guilford, 1950).
Many creativity researchers see 1950 as the start of creativity research (Glaveanu, 2019). That is ridiculous of course. It is like saying there is no history before Guilford. Like Guilford didn’t base his theory on others’ work. However, he was the first in studying creativity as a topic in itself. He laid the foundations of today’s research on creativity.

Creative thinking according to Guilford 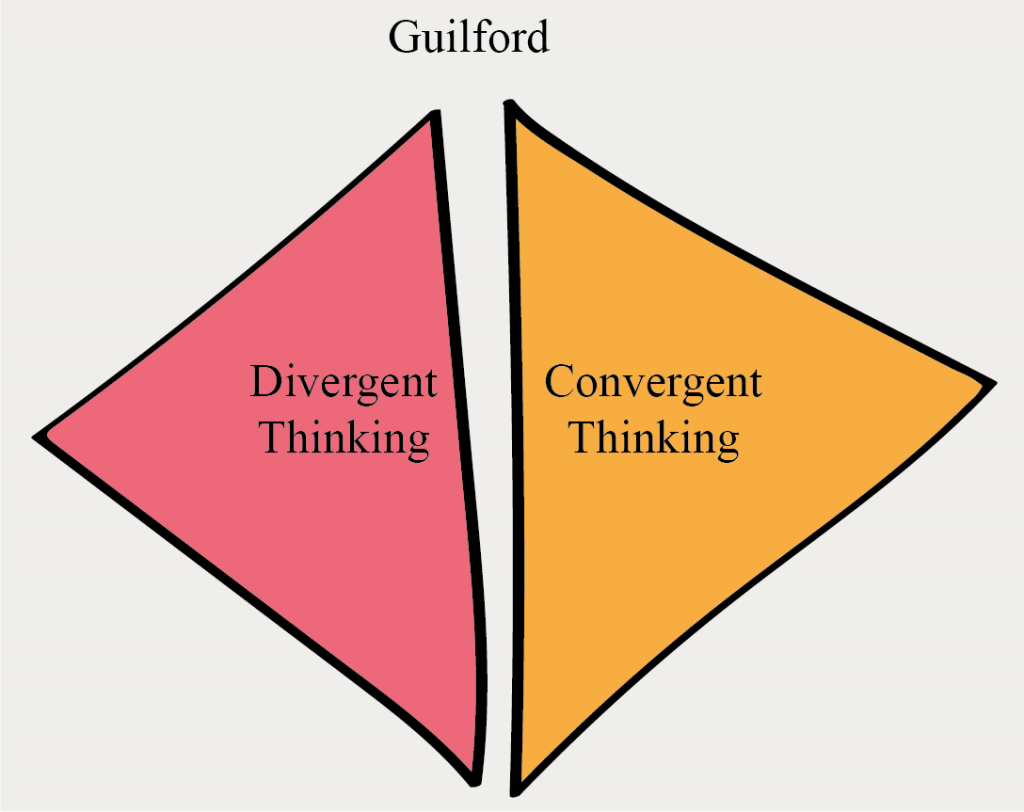 The higher you score on the four factors, the higher your creative potential. You can ask yourself all kinds of scientific questions about the validity and reliability of these measurements. That discussion I leave to the psychometrists experts. Nowadays there are many divergent thinking tests. The most famous one is the Torrence Test of Creative Thinking (TTCT), created by Torrence who bases his test on Guilford’s work. The TTCT is still the standard to measure creative potential.

Diverging AND converging: judging is part of creativity

Walking around in your offices and talking to creative professionals or ‘creative leaders’ I conclude that the general assumption is that creativity=divergent thinking=ideation like I said in the introduction of the article. A worse variant on that is: ‘you need creativity for divergent thinking’. It is more like the opposite: you need divergent thinking for creativity.

You, in the general term, maybe not you as the reader, seem to think that creativity happens in the diverging part and judging happens in the converging part. This is WRONG. The judging is part of creative thinking and should not be separated from it.

There are even scientists that disagree with Guilford’s assumption that diverging is even part of creativity (Weisberg, 2006). But I cannot find any literature (and of course that could be me) that argues that convergent thinking, judging, is NOT part of creative thinking. And it makes perfect sense. If you want to create, you have to make a choice. That is part of the creative thinking process.

Why do we think that only diverging is part of creative thinking?

The simple answer is that Guilford was focusing on the diverging part of creative thinking. It is a misunderstanding, also among scientists that divergent thinking tests measure creativity (Runco, 2010). So we are not alone in our assumption.

But why I think we, as practitioners of creativity, have this assumption doesn’t have its foundations in science. This is where we need to leave California to take the train to Buffalo, New York. I hope it’s Summer. 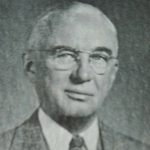 In Buffalo, New York, where we shake hands with Alex Faikney Osborn. Nice, the sun is out, Springtime.
Alex Osborn (1888-1966) is a typical case of The American Dream. Scraped his way through college (psychology), fired at his first job and later became the director of advertising company BBDO from New York City, employing over 1000 people at that time. Then he created a business from his hobby: imagination. He says it is all because he saw the value of ideas that he became so successful (Osborn, 1948). And what do you do when you are successful? Exactly, you write it down. Osborn has written four books on creativity:

If you want to know more about brainstorming you should read Your Creative Power. If you are looking for quotes, read any of them. They are filled with good ones. For example, the ‘Aluminium Company coined “imagineering”: ‘you let your imagination soar and then engineer it down to earth’’ (Osborn, 1498: p5).  Imagineering, what an awesome word.

After writing these books Osborn was not done. He founded the Creative Education Foundation in his hometown Buffalo, New York in 1954. And together with an organizational psychologist, Sidney Parnes, he created Creative Problem Solving (CPS) as a method to enhance creative thinking and solve problems. More on CPS in chapter 5. Whatever we think is true on creativity came from Buffalo (and it still does).

Creative thinking according to Osborn 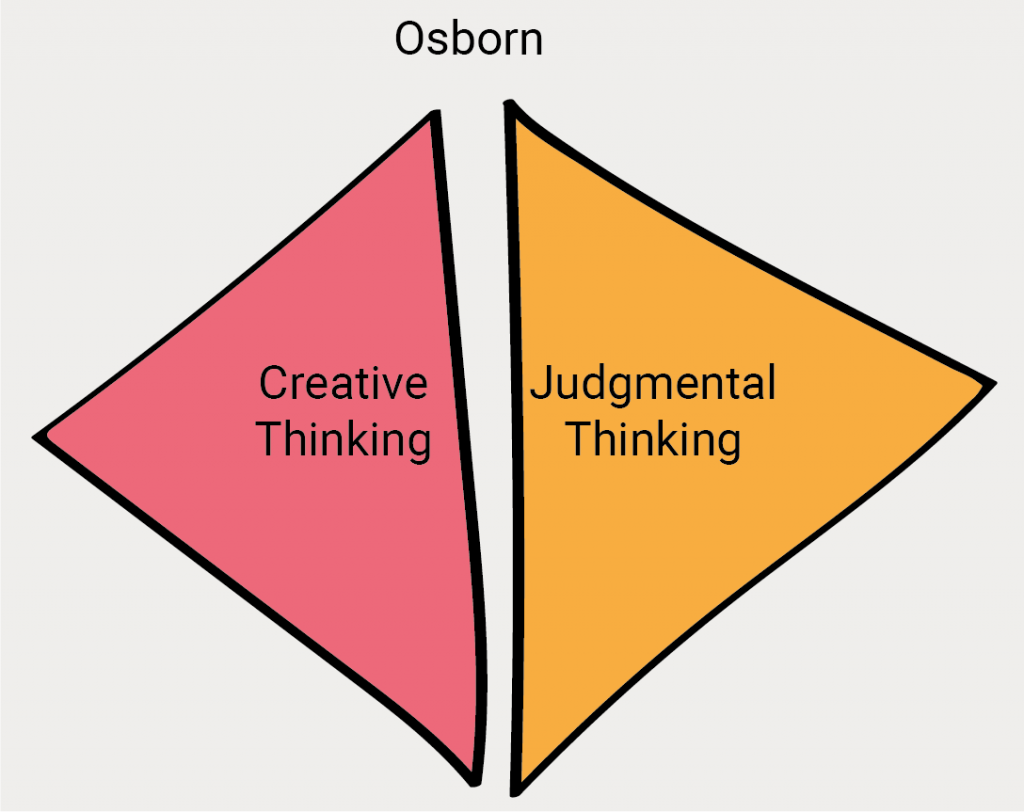 The first is about creating options, the second it about choosing options. In his opinion, we need more of the first type of thinking to solve pressing societal problems. And to stimulate imagination and thus creative thinking in groups Osborn invented  ‘brainstorming’. And one of the rules in brainstorming is that ‘quantity is wanted. The more ideas we pile up, the more likelihood of winners’ (Osborn, 1948, p:269). So, more ideas are better than fewer ideas.

Difference between Guilford and Osborn 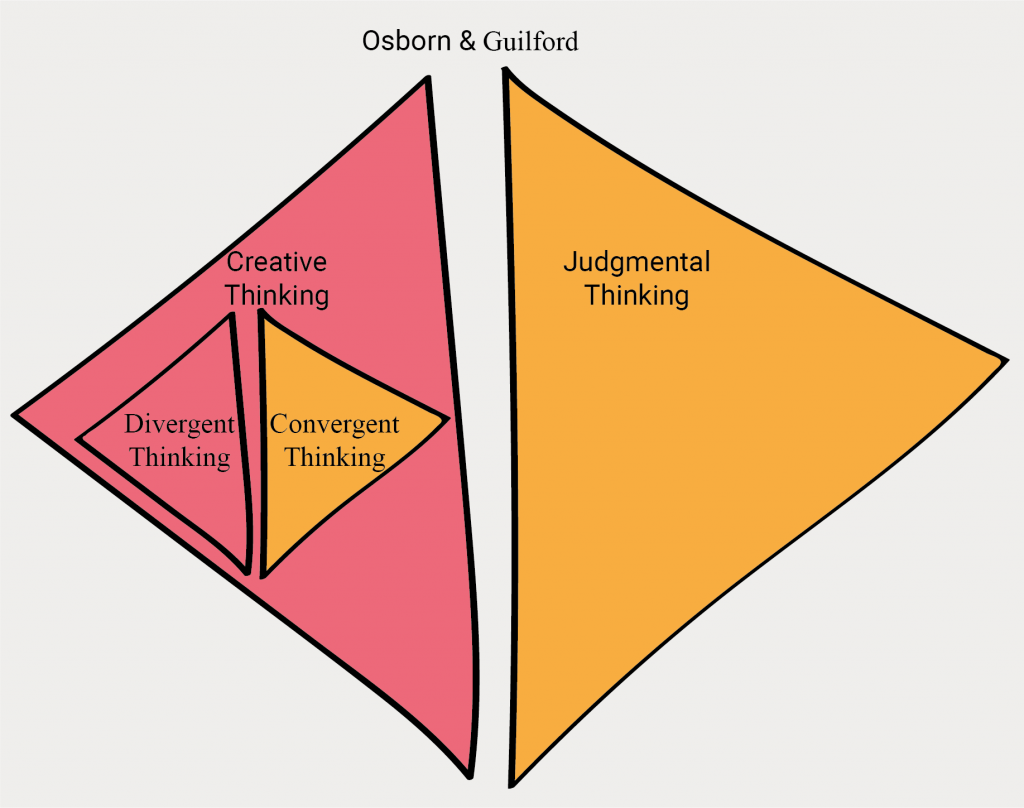 To summarize in words:

Why do we also think ideation is the same as divergent thinking?

This was an insight for as I was writing this article. I never realized I also assumed ideation equals diverging (thank you Mark Runco for pointing that out to me). What is the difference? Well, you can ideate without diverging. You can keep coming up with ideas in the same line of direction.
Diverging or divergent thinking are not words that Osborn uses but he implicitly means diverging when he is talking about idea generation. Technically, there is a difference.
In the language of Guilford:

Even though he was incomplete in his ideas on creativity, Osborn has won the battle so far. Why? Because he was a business man of course!

Back to the Future

Osborn and Guilford lived in the same period. They knew of the existence of each other. How come they never discussed this crucial difference? I need Doc and a Dolorean to go Back to the Future.

Fortunately, I have a colleague at TUDelft, Sam Franklin, who is writing a book called The Cult of Creativity, it will be published by University of Chicago Press. He figures as my Doc.

I asked Sam about the relation between Osborn & Parnes with Guilford. Firstly, Guilford had a completely different motivation than Osborn. Guilford, the scientist wanted to figure out creativity. Osborn, the businessman, wanted to sell his methods. But the latter needed his ideas to be accepted by the scientific community, so he was happy enough when Parnes, a psychologist, wanted to join his quest.

Secondly, in the 1950s there were these creativity conferences in Utah where creativity scientists shared their knowledge. According to Sam, Parnes was not really taken seriously and was more or less tolerated on these conferences. He was put in charge of the development part of creativity, instead of the identification of creativity.

Also if you read current scientific literature on creativity, Osborn and Parnes are only mentioned shortly as a method to develop creativity, if they are mentioned at all…

21st century, we all want to develop and enhance our creativity. And here we have Osborn and Parnes, who claimed to sell a method that does just that. Osborn and Parnes were smart enough to ‘prove’ their method of Creative Problem Solving works. Even though not really taken seriously by creativity scientists. A shame, if seventy years ago, scientists would have truly tried to see how CPS could be related to the identification of creativity, we could have gained a lot of knowledge.

This article is a call for scientists to look beyond science and see what is happening in practice. And this article is a call for creativity practitioners to be more critical about creativity methods. Just because science and business have a different stake, doesn’t mean that there is not a lot we can learn from each other. Let’s bridge the gap between theory and practice!

Check out the topics of the next two weeks below. Next week, the third card from this quartet about another lovely phrase: ‘Let’s think outside the box!’ 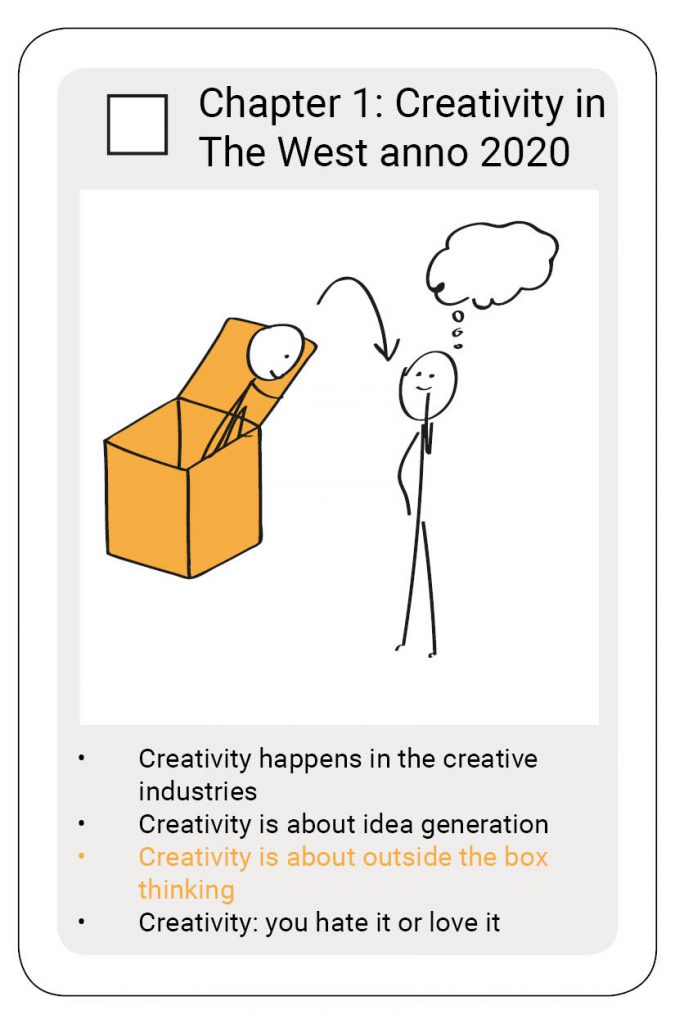 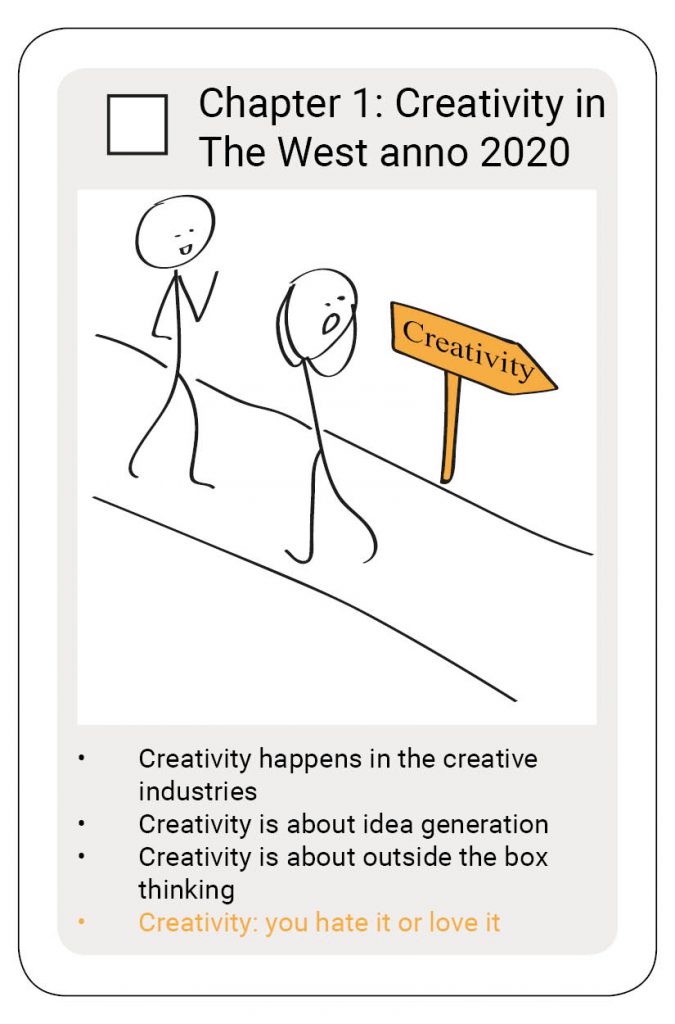 The Creativity Quartet 2020 combines my knowledge on and experience with creativity. Just like any other person I have experience with creativity as long as I live, but more deliberate when I started studying Industrial Design Engineering (IDE@TUDelft) in 2001. I have over fifteen experience in facilitating and training creativity. My interest in creativity theory started in 2015. And I’m currently looking into doing promotional research on creating an overview of creativity theories.
I provide training in creativity & problem-solving to professionals, and I love to talk about creativity & problem solving on stage. To practice creativity, I also design serious/business games by request  (Your Nine Dots) and I teach at IDE@TUDelft.
I do my best to source and summarize correctly. However, if you read anything incorrect or of the hook, please let me know! Ending with my favourite quote on creativity by Maya Angelou: “You can never use up creativity. The more you use, the more you have.”

January 24, 2020Article by: Willemijn Brouwer
Return to overview
Previous
Next 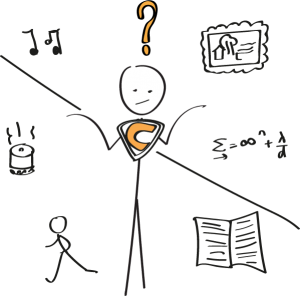 Could Einstein paint like Picasso? No. And Picasso was no brainiac like Einstein was. We give both men credit for their great creative contributions, 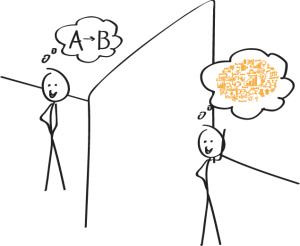 CQ16: There is no such thing as Creative Thinking 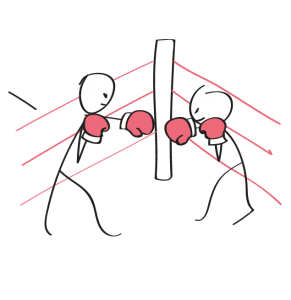 CQ12: Theory vs. Practice: Finding your way through theory as creativity practitioner

The problem occurs when you are a practitioner like us. It is our job to get other people more creative. It would be nice to understand how cre